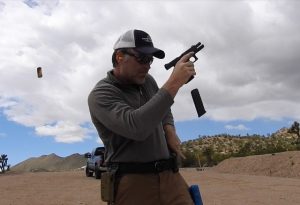 His completive shooting career started back in the early/mid 90’s while at Ft Bragg NC, John got involved with USPSA, 3 Gun and IDPA. He has placed 2nd in the Alabama state USPSA in the limited 10 division, Won the Southern Regional IDPA championship in 2000 and 2nd place in 2001. Placed 2nd in the North American Tactical 3-gun Championship in the Military division. During the last 18 years he has been in and out of completive shooting arena due to deployments and sometimes work just gets in the way. Full Bio

The course is designed to work with the existing Instructor staff on looking at not only improving their performance shooting skill sets but to also give them additional tools to pass this knowledge and information to other Officers within the Department. We will cover in detail the why’s behind what we do in performance shooting as we break it down into 3 separate categories. The mind set of this course is teaching and the transfer of critical knowledge and  information, not just shooting.